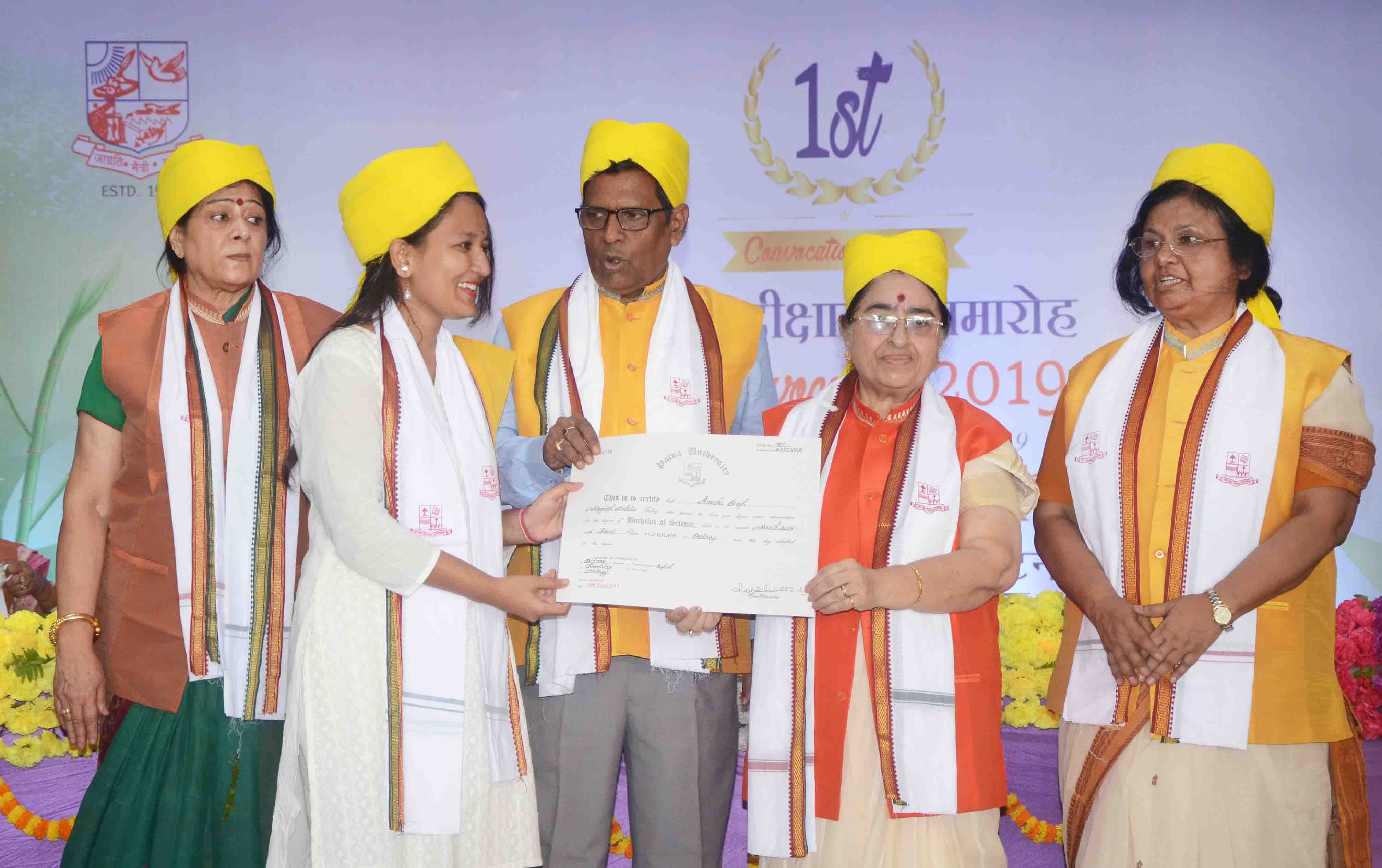 A new dream in all eyes, joy in their heart and  happiness on every   face, such joy could not stop everyone from getting envolved. The students jumped in joy with a white sari, yellow turban and a certificate in their hands. This scene showed in magadh mahila college(MMC)  on Wednesday. The event was of 2015-18 batch  Convocation wherein 616 students were awarded degrees including students of Commerce, Humanity, Science and Social Science. The students happily took the blessings of all the teachers by taking a certificate.

The program started with the national anthem. After this, the principal of the college said that the atmosphere of the college is very pleasant due to the girl students. Then welcomed the visiting guests and parents. She said that there is an effort to make Mukti Kala Manch like Delhi University. After this, the Chief Guest, Member of ex Bihar Legislative Council, Kiran Ghai said that coming to Magadh woman is like a maternal feeling. Appealed to the girl students to move forward with a pledge in mind. she said that the ocean of knowledge is infinite, so do not let the curiosity of the mind be weakened. she also told the students , three sutras – harmony, balance and determination. In his presidency address, the Vice Chancellor of Patna University, Prof. Ras Bihari Prasad Singh asked the students to maintain the reputation of the college. MMC is the center of women’s education and women’s empowerment. Students should wear a turban on the head, understand that it is making sense of responsibility, corsets for modesty and letters of title should be responsible and ideal citizens.

latter the campus of MMC was butterflying with the colours and moods flying all over the campus..

Some friends of the Urdu department were taking selfies around the flowers. Some of girls were  teasing each other and click photos. She had a smile on her face, saying that she had met after several days. On asking, Gulafshan said that the team of 15 of us made a big splash in the college for three years. Stay like family, not a friend. Especially the first didn’t want to miss the convocation’s excitement, so had planned it a week in advance. Then Gajala said that Golgappe of Canteen, Ishmat said that Samosas here, Afreen said that talking with friends for hours can not be forgotten.

The girls who sat in the chair were of the Zoology Department. Gossiping in such a way as if I had met years later. Before asking anything, Ankita of the group said that they have met after a long time. It looks very good. Then Akanksha, Ayesha, Suhani, Mahi said with laughter that having lunch in the middle of class, getting scolded by the teachers and doing a lot of miscreants was also a different fun. Especially in the samosas and outside grounds of canteen, sitting in the sun for hours in cold weather, all these memories are very missed.

BBA’s Anushka said that she was excited ever since she registered. I am so happy that I cannot tell. My two friends Neha and Shilpa live separately, but it is never said that we are different. During college days, we often did not reach college on time, but today all three of us reached before time. Many memories of college, which will never be forgotten in life.